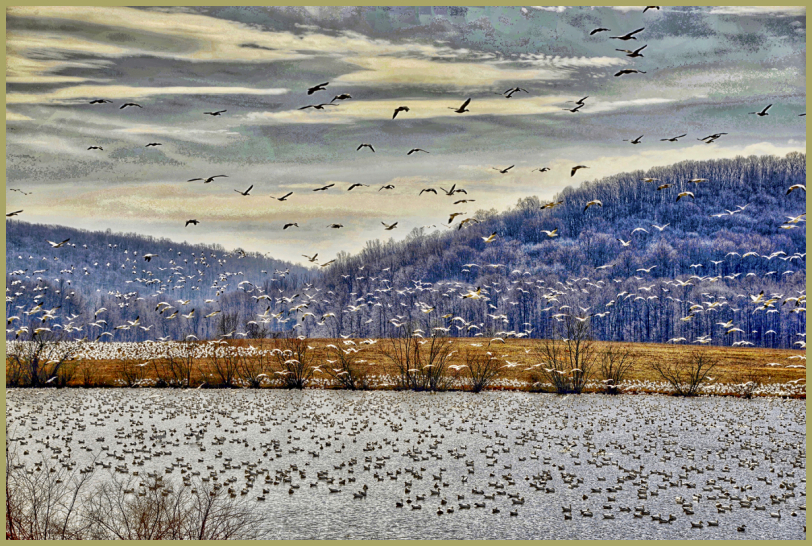 OK, Actually these are geese - Snow geese, to be exact.

Each winter, Hundreds of Thousands of Snow Geese migrate to Pennsylvania from Labrador and Northern Canada.

Although most of my ventures to photograph Snow Geese would be an easy jaunt to Merrill Creek Reservoir (a short ride from our house in Easton, PA when we lived there until early autumn of 2017).

This scene, however, was captured at another Pennsylvania reserve called Middle Creek Reserve...a bit south and west from our home in Easton.
Middle Creek was a 90 minute drive from our house. Still not that far....and always worth the effort.

(I titled this post "The Birds" because we recently watched Alfred Hitchcock's movie "The Birds," which was a terrifying movie in it's day, 1963...rather amazing nowadays. )

@Existence Artistique: Thank you very much ;-)

This is a fantastic nature image, mister Jump. You framed it and presented it beautifully, and as a big Hitchcock fan I have to love the reference.

@Rick: Thank you so much, sir...Hitch was amazing wasn't he?

An amazing scene indeed! Hitchcock would be proud.

Terrific photo painting, Denny, with really awesome colours ... and yes, I remember you posting similar photos with these amazing birds!

This is just spectacular! Every year I want to go to see this at Blackwater Wildlife Refuge and I never seem to get there!

@Elaine Hancock: Thank you so much, Elaine ;-)

I remember all your geese photos vividly and when I saw the preview of this one I thought "it must be Denny's". Was I right or what! Superb work again. The various layers of landscape and birds just work wonders here.

@Darkelf Photography: Thank you, Maciek! I am flattered and so appreciative ;-)