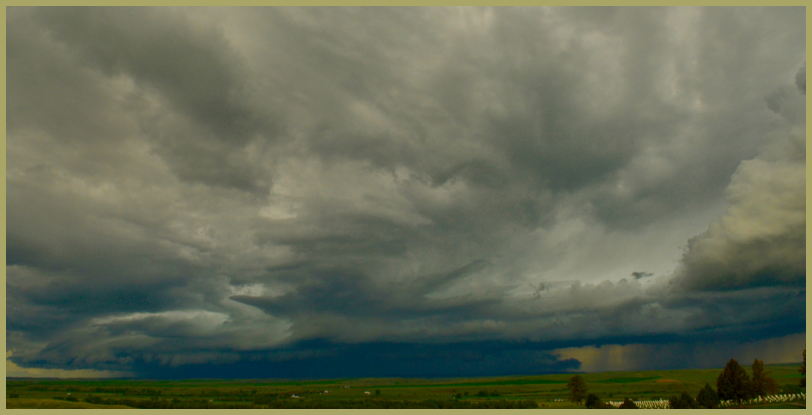 This is an image that I made from atop one of the rises at the "Little Bighorn battlefield National Monument" in Crow Agency, Montana, USA.

Most times out here, the only visual drama is in the sky. But lots of historical drama rises from the ground up to the sky! The spirit of many souls still occupies this place.The battle that took place here on June 25 and 26 in 1876 sadly became remembered as a major battle between victorious Indian combined forces, led by Chiefs such as Crazy Horse, Sitting Bull, and others, and the U.S. Calvary led by General George Armstrong Custer.\ The battle became know as "Custer's Last Stand.

The entire site now consists of a National Cemetery (unrelated to the battle), and a small separate cemetery that does include many of the "Beligerents" of the battle, both Native American (Indians) and Soldiers.

Looking at the stormy clouds hovering overhead and in the distance, I sensed a feeling of something quite apart from what we know nowadays.
There was a very strong an aura of sacredness, contemplation, and reverence that truly captured my soul here.... As a military veteran, I cannot help but feel the emotion that any battlefield brings to one who has experienced wartime battles....

I will try to post a few more images of this place shortly....

@Existence Artistique: Thank you so much my friend ;-)

This looks like a place of high drama. One would hardly expect it to be a battlefield given the places you and I did our battles decades ago.

@Steve Rice: I quite agree, Steve...the aura here was just amazing...I'm not sure if you have had the opportunity to visit, but It is quite worth the VERY long drive....AS for Our Battle sites....My Battalion (4th Bn 9th Infantry, Manchu, 25 Division, Tropic Lightning) saw lots of the Cambodian Border and Saigon River and areas just not and northeast of Saigon....The landscape was nothing like this ;-) BTW although we are still in Vermont and therefore in "traveling Mode" I should be visiting, Posting, and responding more frequently now, I hope....Thank you SO MUCH for following along, sir..Cheers to you and the family....

The sky is just spectacular! It looks like a place that would hold a lot of souls and memories.

@Elaine Hancock: Thank you, Elaine! I agree, it is That kind of sky!

Superb dramatic sky that befits the drama that has taken place on these fields in the past.

@Darkelf Photography: Indeed!! Thank you So much, Maciek! Your images are alwsys Amazing!!