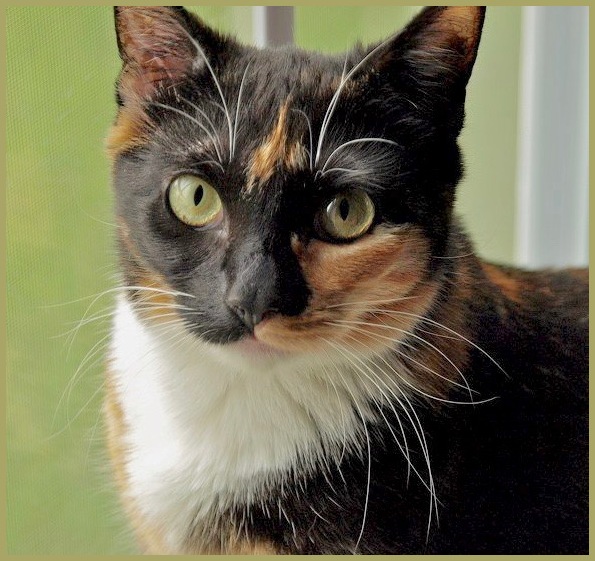 I apologize for this interruption to my current series of the Washington State Capital in Olympia, Washington:

On Friday August 24 (yesterday, as I write this) our beloved 9 year old Calico cat, "Cali" succumbed to a very aggressive case of cancer that rapidly affected her internal system! We noticed things early in the week and took her to the doctor right away, but, as fast as we reacted, the cancer was even faster, and by early Friday, we were faced with the harsh fact that we would have to say goodbye to this cute little girl who was the light of our life!

So now, Barbara and I are trying to get a grip on things and move on - it is hard to imagine how we can do this, but we will somehow...

I will return to the current series of the State Capital in Olympia, Washington in a few days. Until then, Thank you for your understanding and support.

Sad to read. I know all too well the emptiness brought on by the loss of a cat . . It takes time to come to terms but they are never forgotten.

@Ronnie 2¢: Thank you,Ronnie...your words are so very much appreciated and so true. Mornings have been tough, but as the sing goes, "It’s Getting Better..."

@Existence Artistique: Thank you...Yes her eyes were so beautiful...

I discover this sad news tonight and wanted to tell you I think of you. And I also thought of you when hearing of the death of John McCain who fought in Vietnam and dared saying what he thinks about you-know-who.
Cats have 9 lives. And I'm sure Cali's soul will stay alive within yourself for even more. Much love to you all, my dear Denny***

@k@: Oh, Thank You so very much, Karine! We have had pets before and we were always so sad when they passed....but, for some reason, this little girl's passing has been the most difficult to overcome! Perhaps it is our advancing age...probably so.....Nevertheless we are slowly moving on....but I still have the most difficulty in mornings....I am a man, yes, but I have a heart and I have feelings...Barbara too....so we press on. So sad about Senator NcCain....as for politics, I was on the opposite side to most of his positions, but, as a Vietnam Veteran, I ALWAYS respected this man...and when he was battling obama to become president, he was always gracious and respectful....That's the kind of man he was....Gracious and respectful....He shall be missed. Finally - Thank you so much for your wonderful words of encouragement and love...You truly are a woman of spirit and peace and honesty....Thank you SO very much for thinking of us and for the loving message you have given us....I truly hope that, one day, we can meet at least briefly, for a hug and smile....You arr such a special friend and I thank you and love you for being there....Peace and Love, Always, der pal!! <3 hugs - Denny AND Barbara ;-)

It's so sad and brutally hard to lose such wonderful companions. Best wishes to you and Barbara.

@Steve Rice: Thank you, Steve. It has been especially difficult... We have lost pets before but this came-on so suddenly, we were caught unaware....but slowly we are getting better...Sometimes things just don't seem fair, do they? Thank you so much!.

Very sad news. I hope you an Barbara are holding up well. We had a couple of budgies die on us previously and even though they were with us a lot shorter, it was still hard to take in. I think it's always best to look back upon the happy times you had with Cali and the happiness that she brought into your lives.

@Darkelf Photography: Thank you for your very kind sentiment, Maciek. I agree with you...to remember the good - times with pets that have passed on - brings a tear but also a smile...Bless you both!

It is so sad to lose a beloved pet. Kitties are such companiable and non-demanding friends.
Who could resist those gorgeous eyes.

@Anita: Thank you so very much, Anita...I am grateful for your kind note...Best wishes to you <3

I am so sorry you lost your little one. Pets have a way of attaching themselves to our hearts. Cali is beautiful.

@Larry Bliss: Thank you so very much, Larry...I am so sorry that I dod not see this message sooner...but I am so grateful to you for your kind words...<3