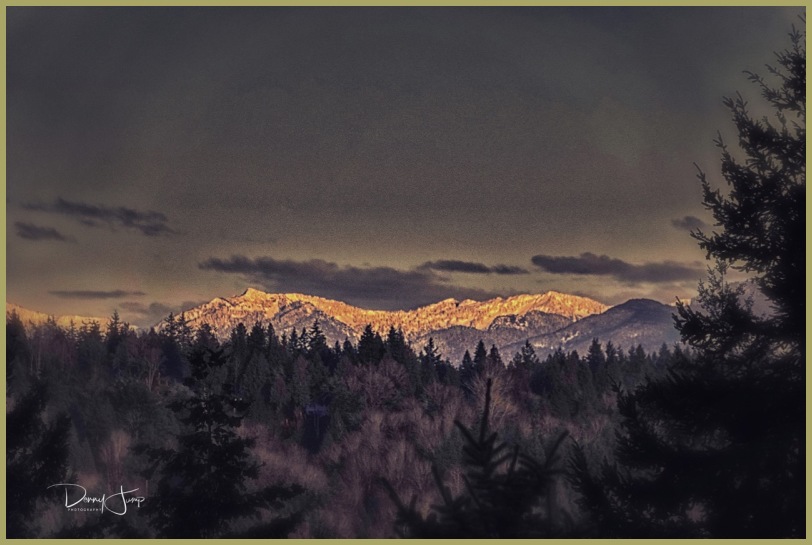 "One in a Million"

A "One in a Million" opportunity arose for me a few evenings ago....

The image I was having fun making was presenting me with a narrow strip of Cascade Range mountain peaks being "Lit up" by the sun and there was scanty time to go before all of this disappeared!

I fired away, frantically trying to adjust things as I went with my ("still new to me") Sony RX10IV Camera, as the sun began to "close out" on it's dedicated shine towards the mountaintops.

Later, as I was doing my post process editing. there were some distracting structures amongst the woods, that I really didn't notice in the excitement of the moment earlier.... So, I ultimately decided to "make them disappear with "Pixelmater"....'
So,I also did that...(I could have remained silent but I don't like to do that).

SO, I DO like this final version....I did nothing to the rest of the image, with the exception of adjusting light and getting rid of noise and adding some Orton effect in the foreground trees...

Ultimately. this end result certainly struck me as truly a "One in a Million" image with the sun, casting it's light solely on the mountain tops and the rest of the scene remaiing in the ever-increasing shade and darkness.

I hope you like this one.. The Title, I chose because this all made me remember that old hit song written by Sam Dees and sung wonderfully by Larry Graham (see link below if you wish!)

This was well worth all the effort here . . but it all comes down to ceasing the moment before it is gone. You sure nailed this one !

a million stars to this :-)

@Harmonia: Thank you so very much!!

Well worth the effort Denny. A nice result.

An excellent piece of work. It turned out brilliantly.

A gorgeous view with the peaks gloriously illuminated!

I can see exactly what made you notice this scene. The light on the mountain range is fantastic and it isolates it nicely from the surroundings. Interesting description of your entire photo process Dennis, from the idea to final post processing. Great insight.

@Darkelf Photography: Thank you so very much, Maciek! I was enjoying the scene but cursing the aggravation of getting the settings right....After years of shooting images, I still feel as though I am in the Twilight Zone with more questions than answers ;-) I love doing this but my failing memory capabilities don't make things very easy....I learn things but by the nest day, I can't remember what I learned....Oh well, I shall persevere;-)