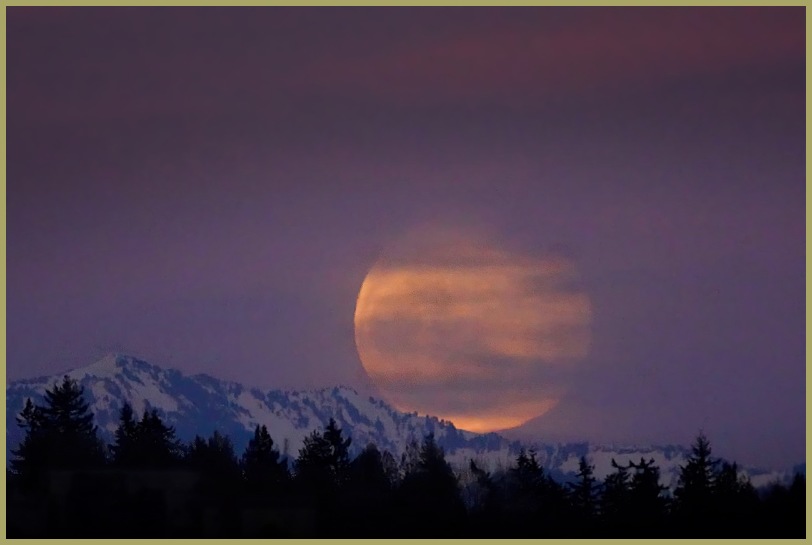 Worm Moon over the Cascades

It was 7:26PM and getting dark..... really quick.
The Sunset was just starting to do its thing in the west (behind me). But Was dead set on getting a moonrise, so long as the clouds don't get too thick.....
The clouds were getting thick....But not really fast ....not just yet...

I was parked on a neighborhood hillside that offers some really nice eastward views of the west-facing Cascade Mountains.... if you know where to go....
I was waiting for the March Worm Moon to appear...."Quick, Moon,We don't have much time!!"

Looking back to the east, I saw this bright shiny object and, at first, I thought it was Mount Baker because Mount Baker is over that way and it kind of stands out behind but between the ranges we see here.... But it was not Mount Baker!...The shiny object kept getting Brighter and it continued to climb upward..... This was an important hint that it might be the moon....probably was the moon... Oh my Goodness! it WAS the moon!

This is the March "Worm" Moon! Native Americans call this month's moon "Worm" because worms start getting active in the month of March....

The sky behind me was getting very colorful, so I have one or two of those that I can post in the future ...Meantime, I hope you enjoy this view of the March "Worm" Moon!

PS - This image was made with my new Sony DSC RX10 M4.....It is an awesome camera but I am still crawling along trying to learn the thing....I am a slow learner and I usually forget what I learned within 12 hours of learning it....so I just keep marching on....

Thanks for your kindness and patience ;-) <3

You nailed it! Give yourself time. You are learning that new camera, probably more than you realize.

@B. Thomas: Thank You, Barbara... perfect westher the last few days with all of us "Seattle-ites” walking around sweating to death in these horrible 74 f Days ! LOL But it is supposed to return to hi 50’s - Mid sixties...starting today ;-)

Yowza! That is a big beautiful moon Denny. Love the colors in this photo as well.

@Jason Kravitz: Thank you so much Jason!! It is a long story why my settings are not listed...but I was using mynew Sony Grid camera..a DSC RX10 and I had it stretched out to at least 600( ) because the camera has feature in it that will a llow..and I wasn’t paying attention while shooting... .That’s just the beginning... Anyway, thank you SO much, sir!! Always an honor to hear from you! Cheers and thanks again! ;-)

A fabulous image with that huge moon!

@Steve Rice: Thank you so much, Steve .... itwas a fun time but an interesting situation ;-)

Wow! That is one huge lunar presence! Congrats on the new camera. Give yourself some time.

@Steven: Thank you so much, Steven!!

this photograph is superb, but "the star" seems immense

@yoshimiparis: Thank you, the Moon is quite large because I zoomed in to 600mm ( ) also the mountains in normal view were very far away, but with the 600( ) mm zoom, they seemed larger, also ;-)

Superb photo Dennis. Love the big moon that fill a lot of the scene. it is semi hidden behind the thin clouds and that just adds to its mystery. Great write-up as well and it looks like you are getting the hang of the new camera just fine :-)