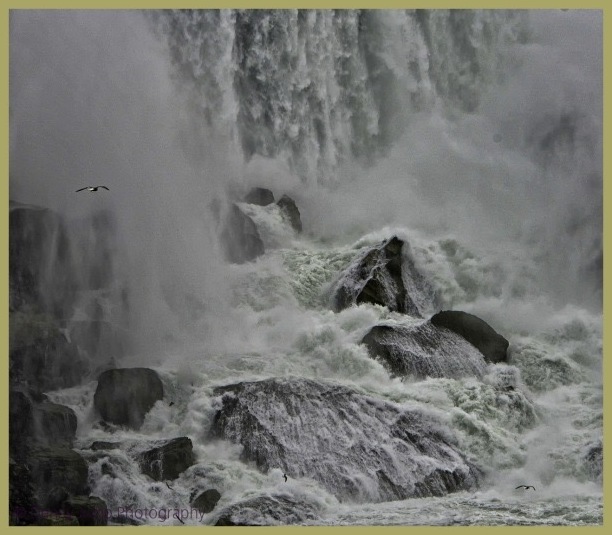 Oh Canada - I Love You Forever

The Bird of Peace flies relentlessly over the "Border of Canada and U.S.....She protects all.

The peace and friendship that has blessed these two Nations for Centuries, MUST Continue.

My maternal grandfather, David Wintermute, was born in Ontario Province, Canada. Years later, His daughter, Margaret, who was a US Citizen, gave birth to me and my brothers and sisters.

I never met Grandfather David, but my son, David, carries that name forward with his family! For me and my brothers and sisters, our heritage on both sides was always stressed by our parents as we grew up!

I am so proud and happy that this all came to pass because, years later, as a soldier in the US Army in Vietnam - I met and became fast friends with an Ontario Born Soldier who had volunteered in the United States Army! His name was John Austin Anderson, was a fantastic guy, full of heart and friendliness and ease of manners.

Shortly after we met - not long at all - we were all assigned to a region in Vietnam that included a huge Mountain named Nui Ba Den! The Mountain "stuck out" in the otherwise flat regions around it. John and others, were assigned to a Radar/telecommunications facility at the top of the huge mountain. The rest of us stayed down below, guarding the tunnels and other areas with our equipment and protection.

During the night, the facility at the top of the mountain was attacked by North Vietnamese and Vietcong Forces. Among the many victims of this attack were John and another friend of mine, Moses Cousin!

Meeting John Anderson always had an impact on me because, After all, John did not need to volunteer to fight this war! He did not need to take part! Bt he did!
What an amazing soul!! ...

....And so, on this Canada Day, as a descendant of Canadian family, I was always so very impressed and so very proud of those from Canada and other Nations who would volunteer to fight alongside the USA in that terrible war!

This is what friendship and bravery is all about:
Free people joining each other to fight against despots, murderers Hatred....

And, ALL OF THIS is What Makes ME so Very Proud of my Canadian Heritage!! Canada, That amazing nation!

And I am Proud and Thankful to claim a title bit of Canadian heritage That small amount is what makes me so very proud. And I think about that almost every day!!

Finally, That stoic and permanent nature of this massive waterfall that is a National border for parts of Canada and the U.S., is emblematic of the relationship that the US and Canada have had...

SO ONCE AGAIN,, CITIZENS OF CANADA, I WISH YOU ALL A WONDERFUL CANADA DAY!! YOU DESERVE IT!!

OH CANADA - I LOVE YOU FOREVER!!

The photography is superb, I love the bird in full flight.
All this brings us a little cool here in Paris, because we need it

@yoshimiparis: Thank you so very much. Yoshi ;-)

Wonderful framed picture. I wish you a nice celebrating Canada-day. It´s good to know the own roots.

@k@: Wow!! Hi dear pal!!! Thank you so much for stopping by my little blog. I know that you have been busy as usual with your work and life. But I have been thinking about you alot lately, just wondering how you are doing and if all is ok Thank you very much for your message. Wishing you all the best! Miss you, kiddo! <3

Beautiful image and moving tribute to your canadian family heritage !
Canada is now the country of my son and I'm happy for him !
Happy Canada Day !

@Anna Cherer: Your son is now residing in a magnificent country, Anna! Thank you so much ;-)

What a magnificent photo! I can hear the water and feel the mist just looking at the image! Beautiful.

@Tara: Oh, Thank you SO Much, Tara. I am so happy that you found and commented on this post. Every day of my life, I think about my true roots. All my love to you, dear Pal Wishing you even greater success in the coming year!

What an absolutely breathtaking image!
Happy Canada Day my friend! I am so proud to be Canadian.
I immigrated to Canada over 25 years ago and instantly fell in love with the country and with the people.
The Americans and Canadians are like brothers and sisters. With that comes rivalry and some ‘squabbling’ but at the end we will always be ‘best buds’! To you my awesome buddy - let’s celebrate today and always!
I want to hear more of your ‘war stories’. I’m so sorry you lost your friends and you witnessed so many horrific moments but it is important to share them with us all. We need to be reminded where freedom comes from and what it means ❤️

@Magda: Magda, I am so proud that I have come to know you! Your beautiful ways of delivering a message seeps into the heart and spreads love everywhere. Just getting to know you has been something that makes this old man’s heart sing out loud. You are now in my heart and never will leave! And I am so thanful and happy. I just wish that everyone could see your beautiful photographic inspirations! There will never he anyone else who can enter a heart and memory simply by depressing a shutter button!! Love you so nuch my dear pal! <3

A beautiful image and tribute.

@Steve Rice: Thank you so much, Steve! You have been such an inspiration to me!! Thank You!

Very nice tribute, and lovely image to go with it. Happy Canada Day.

@B. Thomas: Thank you so very much Barbara. All the best to you both!

@Darkelf Photography: Thank you so much, Sir. I hope all is well ;-)